Nashville, Tennessee (March 21, 2022) — “We Can Do It!” What does that saying mean to you? Too many people in America, it means hope, strength, and community. This iconic saying is portrayed by the image of the working woman, Rosie the Riveter. And today, that’s who we are celebrating.

On March 14, 2019, the U.S. House of Representatives designated March 21 as “National Rosie the Riveter Day.” According to H.Res.237, this day is a collective national effort to raise awareness about the 16 million women who worked during World War II. We recognize and preserve the history and legacy of working women, including volunteer women, during the second world war to promote cooperation and fellowship among these women and their descendants. 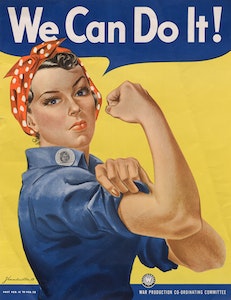 On this day, we not only remember the women who supported our country in WWII, we also celebrate the women of today who are working in the same roles as men. As women, we have worked for many years to #BreakTheBias and earn the same career opportunities as men.

According to a report by American Express, there are nearly 13 million women-owned businesses in the United States, representing 42% of all U.S. companies. “That means women own 4 out of 10 businesses.”

Jessica Denson, Communications Director for Connected Nation, can attest to how hard women must work to get the job opportunities they deserve.

“I got my work ethic from my father, Jim, who told my sister, Jennifer, and I to always end a day of work knowing you ‘earned every penny of your paycheck,’” said Denson. “My dad raised two daughters mostly on his own. He told us we could be and do whatever we’d like — as long as we put the time, energy, and hard work into it.

“I never saw myself as ‘less than’ a man because of that,” she continued. “It wasn’t until after college that I realized it wasn’t always so simple. I could work harder and even smarter than my male counterparts, but it didn’t mean I was afforded the same opportunities, paid the same, or even judged the same. Much like the strong women who went to work in WWII, my response to those challenges is to be bold. I would encourage other women to do the same no matter where they are in their careers. Ask for what you’re worth without apologies.”

Women are continuing to work our way to equality thanks to motivating figures like Rosie the Riveter. To break down barriers in the workplace, we must come together and utilize every possible resource to get us where we need to be.

Below is a list of resources to help women #BreakTheBias in the workplace: