This article was published by Leaf Chronicle on February 28, 2020.

Sarah McBride estimates she applied for dozens of jobs in the nearly three years she’s lived at Fort Campbell as a military spouse.

But despite her extensive background in retail and administrative jobs, and the assistance of career counselors, she wasn’t having any luck finding the sort of flexible work she needs.

Then she was referred to the brand-new nonprofit program Digital Works, a telework training course that provides credentialing and career services to military spouses and veterans looking for work-from-home career options.

“Everything was coming to a dead end,” McBride said. “It’s sad, because we give up our hopes and dreams to move and support our spouses on the homefront. I was just feeling hopeless. I figured, what do I have to lose?” 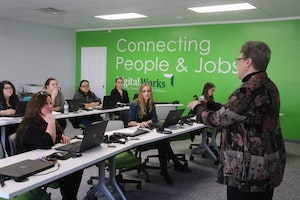 McBride joined eight other spouses and veterans for the first four-week class offered by Digital Works in February, which included daily four-hour classes. Each week, they’d tackle a topic ranging from general customer service skills, to communication skills, to escalation and feedback technique, to resume building and mock interviews. In the end, they were certified through Digital Works and the National Retail Federation.

“By the end, they’re the most efficient teleworker they can be,” said Jessica Golson, Digital Works facilitator.

The grant-funded certification and job placement initiative run by Connected Nation opened on Fort Campbell Boulevard outside Gate 4 earlier this year after first conducting a pilot program at Fort Knox.

That program landed all 12 participants jobs.

Golson said that’s when they recognized their program — originally designed for rural workers — could also help military spouses looking for telework jobs, which often offer flexibility and opportunities to advance.

“They saw a need,” Golson said.

Golson said beyond providing the training and certifications, the main focus of Digital Works is to help military spouses and veterans land customer service positions with their roster of more than 70 pre-vetted telework companies.

“We don’t stop until they get jobs,” explained Digital Works proctor Alex Zapetis.

McBride said she has nothing but good things to say about her experience.

“It’s been awesome. I wasn’t sure how much I would learn, but I was learning each day,” she said. “They’ve been able to point us in the direction to help us find real jobs. They’ve literally taken us by the hands and shown us how to market ourselves.” 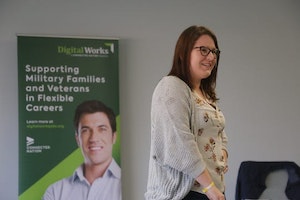 Within days of getting her certifications, McBride says she’s already advanced to the next round of interviews with several companies. She’s hopeful this is the beginning of a new start for her career.

“I want a company where I can stay and grow,” McBride said.

Jessica Romey, a military spouse and veteran who also completed the first class, said that’s what she’s looking for as well.

“I think this program is really great because it focuses on our community. It give us something to work toward that fits our life,” Romey said. “I don’t just want a job. I want a career. I deserve more for myself. I deserve something I want to do, not just something I have to do.”

“It gives you the support you need,” she said. “Trying to do it on your own can be intimidating.”

Golson said they encourage participants to build those relationships. Plus, she said their services continue even once the class ends.

“We’re trying to foster that community,” said Golson, who said they continue to check in with program participants and provide job services. “The mentorship role doesn’t go away when they graduate.”

She said they even provide round-the-clock access to work stations with computers, phones, headsets and webcams for folks who’ve landed a job but don’t yet have a home office.

Golson says everyone in their first class is well on their way to landing jobs, with most already looking at two to four job offers. Now, they’re looking to spread the word about their program, which kicks off its second class March 2.

“The focus is to build this program,” Golson said. “We’re legitimate, and we want to be used.”

Spouses like Romey say it’s well worth the effort.

“It definitely helps you learn, grow and find a job,” Romey said. “I feel this program has given me the confidence to go out and keep trying.”

To apply, go to digitalworksjobs.org. Read the original article here