Tammy Spring, Digital Works Operations Manager, described Colby as “someone who went above and beyond” during his time in the program. As a result of his hard work, he was able to find employment within one month of graduation. But even after he landed a job, he continued to support his classmates by providing them with remote job openings he found online. 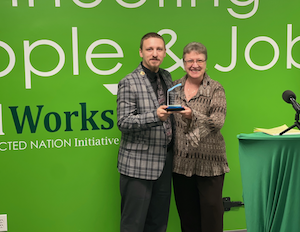 When he was honored at the Digital Works facility in Fort Campbell, Kentucky, in November, Colby credited Facilitator and Development Coordinator Melissa Anderson with his success. “Without our great teacher, none of this would have been possible,” he said.

Colby entered the Digital Works program following the completion of his active-duty service at Fort Hood, Texas. “It was never lost on me when I left Fort Hood that I would need necessary skills to succeed in the civilian sector of life,” he said. “Military and civilian language don’t always jive, but Ms. Anderson was always able to assist me in translating my skills and putting them on paper.”

Connected Nation thanks Colby for his service to our country and wishes him the best in his career and future endeavors.